How 3D Printers are changing the EOD World

A police department in the US has invested in a 3D printer and introduced 3D printer courses for its SWAT team and bomb squad.

Following the success of this, the sheriff’s office has invested in an FFF 3D printer and a dedicated server for sharing designs, while WMDTech has introduced a pilot course to teach SWAT and bomb techs how to draw and print 3D objects.

Blowing away the cost of a detonation cord clip

“We were having an issue getting the electrical tape to stick, and a hard time getting the det-cord bundled uniformly in the manner we needed for the charge to work correctly,” he explained. “I had been doing some contract work with Boise-based WMDTech…so I wanted to see if they could 3D print a clip that would hold the det-cord together quickly and securely in any weather.”

Curtis was helped by WMDTech R&D engineer Kealyb Draper to realise his initial designs for the detonation cord clip, which were drawn up, 3D designed and 3D printed in a matter of hours. 3D printing not only delivered the clip quickly, but it was also a much cheaper option than other custom manufacturing options.

“Without 3D printing, the cost of creating the det-cord clip and sharing it with other breachers and bomb techs could have cost $10,000 for an injection mold,” Curtis explained. He also noted that further pieces would have cost $1.50 each to produce (with a minimum 10,000 piece run), and that had there been a problem with the detonation cord design, another $10,000 would have had to be spent.

“With 3D printing, if you need to change the item, you simply change the drawing,” he added. With a digital file, the only expenditure for 3D printing more components would come from 3D printing filament. 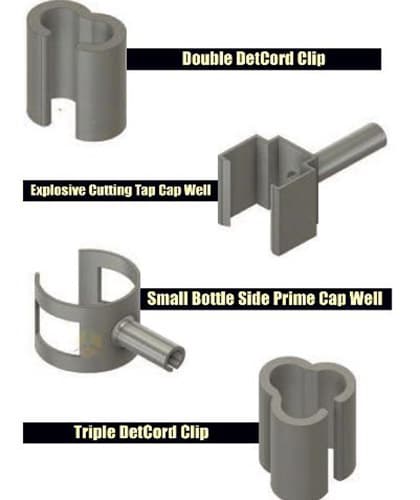 Following this success, Curtis continued to develop and 3D print other customized pieces of equipment for the bomb squad and SWAT team.

“THE BEST PART WAS GETTING AN IDEA, GOING HOME TO DRAW IT UP AND PRINT IT OUT OVERNIGHT, AND THEN BRINGING A FINISHED PRODUCT BACK TO THE STATION THE NEXT DAY.”

With the benefits of investing in a 3D printer for the Sheriff’s office all but confirmed, Bomb Squad Commander Sgt. Peter Quittner purchased a Fusion 3-400 FFF 3D printer, costing $4,950.00 using a state grant. It has since been used by the county’s jail, search-and-rescue, bomb squad and SWAT teams.

Ultimately, FFF 3D printing was chosen because it was cheaper, more suited to the specialist applications of the bomb squad, and it required less post-processing than SLA technology, which sometimes requires solvent rinsing and UV baking.

To teach bomb squad and SWAT team members about 3D printing, WMDTech held an initial course in 2017, which has now become a regular fixture. The next project for the Utah Bomb Squad Taskforce is to set up a server where these innovations can be shared with SWAT and bomb squads free of charge.

Increasing numbers of public services in the US have been adopting 3D printing for the production of tooling and components. Earlier this year, the US Navy showcased a range of its 3D printing projects, including explosive charges, fuel cells and charges. On the other end of the spectrum, the City of Magnolia fire department in Texas has been 3D printing signage and mask holders.

Get the latest Intel

Reach out to us via the form below and our support team will contact you as soon as possible.

By subscribing to our email list, you agree to stay updated on WMDTech news, offers, and information on our latest products and training. You can opt out at anytime.